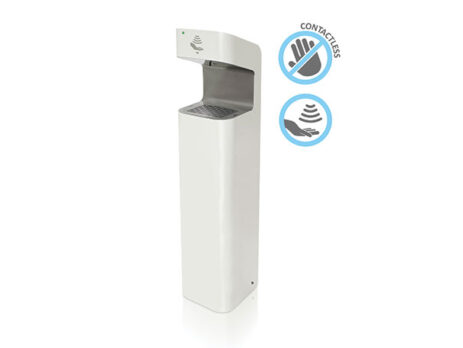 Cervic Environment has developed an Automatic Hydrogel Dispenser for massive use which is safe, hygienic and efficient. The dose is administered by a sensor which detects the hand, so it doesn’t require any contact with the dispenser. This dispenser offers up to 50.000 doses for each 5 litres drum. The drums are not connected to each other. The dose is regulated between 0.10 to 3 ml by a potentiometer.

It works autonomously like a laptop: the dispenser has a charger similar to a mobile phone’s one with two different uses, to charge the battery or to operate via the electric main without using the dispenser battery. The battery is 12VDC, is charged at 220VAC and has an independence up to 100.000 doses. In addition, the dispenser incorporates an LED light that indicates when it is on and also when it is low on battery. The rear door of the dispenser is locked and provides access to the drums (current and refill), battery, potentiometer, pump-priming and ignition switch.

In addition, this dispenser is portable, as it incorporates two rear wheels that facilitate its transport.

This Automatic Hydrogel Dispenser is designed for indoor use only.

The Automatic Hydrogel Dispenser 5L + 5L is a Patented Product. It is designed and manufactured in Spain. 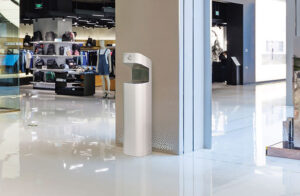