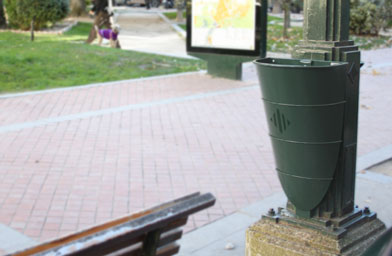 Viena litter bin model is result of the development process carried out by I+D+I Cervic’s department along with maintenance and cleaning technicians from Alcoy City. The peculiarity of this litter bin lies on the fact that it has been designed to be fitted to the existing streetlights. Its main feature is a quick and ergonomic emptying system to make easier its handling by waste collection workers.

Nowadays, Alcoy city Council has placed about 100 units of this litter bin model in different places of the city. Town councilor for Common Spaces and Urban quality, Paco Blay, has pointed out the convenience of this version “given that the emptying solution included is suitable” and also has stressed the popular acceptance of this new model “as it adapts to the aesthetic of Alcoy’s already existing urban furniture”.

As complement to litter bins, Urban-Pro ashtrays, also designed by Cervic Environment, have also been installed to city streetlights.

Although Alcoy has been the first city to install such litter bin model, Cervic has received several requests for this new product which has been patented and included in Cervic’s catalogue. 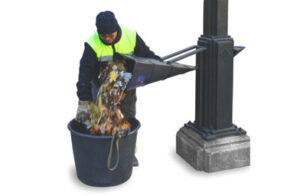